All the featured album art was starting to bog down the blog. A blog bog if you will.

So I’ve deleted it.

You can still look at all the wonderful album art on my Instagram..

Hey, here’s big pile of ooie gooie groovies from a dope little label in Philadelphia. Yep, of course the squiggly red line showed up under Philadelphia. Oh there it is again. Why can’t I spell that? I sounded it out! Anyway Get Better Records is here to help you get better at listening to music that doesn’t suck. They don’t tolerate bullshit and neither should you.

Alright, well anyways, Crimpshrine was one of the more respected Cali punk bands of the late 80’s /early 90’s. Big whoop. ugh. Ok, so all your favorite characters from the Bay Area hippiepunk scene had some role in Crimpshrine at one point or another didn’t they? Greenday, OPIV… umm, ok maybe that’s it. Wait, there was Fifteen too, and probably Isocracy. I don’t know, who cares, look it up. I’m not fact checking this stuff. The point is they were important. It was a pivotal time for punk. blah blah etc..

Aaron Cometbus was the drummer for Crimpshrine. I think maybe it was his first band. Since then he’s played drums for every band on earth at one point or another, including Bon Jovi (fact check?). Also throughout his entire career of not showering and playing drums, he managed to maintain one iconic zine called Cometbus. It more or less chronicles the lives of himself and various other punks from all over the place as they dive into dumpsters and other such punk stuff. If you missed out on the zine, you should set a month or two aside this summer to read the Cometbus Omnibus because it’s beautiful. sigh.. if you want to.

Oh, the song.. ugh, ok. The Direction Of Things To Come. Jeff Ott’s voice is like a chorus of angels on this one. It first came out on No Reality Records in 1990 as a split EP with G-Whiz called Burning Bridges. I don’t know anything about G-Whiz. It was later released again on The Sound Of  A New World Being Born, which I guess was an anthology of sorts. I think these lyrics more or less sum up my mood right now:

Older people I looked up to now just seem so lame
Their idealism is gone just like “the old days”
Burnt out and jaded, their old spirit faded
I hope that in a few years I don’t feel the same way

Ok, I’m sure now, the band is called PASTEL. I thought it might be the name of an Italian record label because this is a compilation (it’s called 8 Feet Under). Then I got confused about who put out the comp..(I’m easily confused). Turns out it’s a Canadian label called Zegema Beach Records. It looks like they have lots of cool stuff in their catalog, so I might have to do some digging there. Anyways! these are the two songs by the Italian band PASTEL (right?). They’re like super wiggly-jiggly and mathematical. I’m really diggin’ the first one. From what I can tell the lyrics consist of only one line: “Scavare Per Piantare Anche I Nostri Sogni”. Which, if my completely organic and expert translation skills are correct, means: “Dig For Planting, Even Our Dreams”. COOL!

The Smith St Band – More Scared of You Than You Are of Me
[Buy it on Amazon!]

I don’t usually like my punk so cleaned up and polished like this, but these are big songs and I guess that warrants big production. The ultra-australianess of this guys voice is going to put you off at first, but don’t panic. It is going grow on you, I promise. It’s pretty bluddy incredible actually.

Hate Club – No Seriously EP [Buy it on Amazon!]

Female and male fronted indie-emo from upstate NY. It’s scratchy and catchy as fuck. There’s a weird excerpt from an episode of The West Wing on here. I’ve never seen that show and I’m not sure if it doesn’t suck.

Xetas – The Tower
Noisy punk from Austin Texas. They look like nice people but this stuff is pretty viscous. It’s not gonna rip your face off or anything but it might kick you in the shins. You’re gonna take it and you’re gonna like it though. 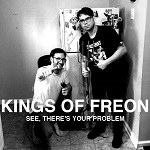 Kings of Freon – See There’s Your Problem EP
This is obviously an inside joke. I’m not in on it but I still find it hilarious. I feel like this might be a side project, but I don’t know who these guys are. All I know is, this is the best fridge-punk album I’ve ever heard. What is fridge-punk you ask..? Well, in this case, its lo-fi indie punk with lyrics focused exclusively on refrigerator repair. No, I’m serious, and it’s really good.

Woozy, screamy, a fuzzy rock covered in moss. It’s a nice place to sit down for a while. Take a little break. Watch out for slugs.

Listen on Spotify or Bandcamp

This is a test post. Blog will launch shortly.