Ever heard of Corvallis Oregon? No. The answer is no, you have not. Oh you have? Well you must be from there, so it doesn’t count. Oh you’re not from there? Well you must go to school there then. Look pal I’m going to have to ask you to stop interfering with my blog.

The point is, most people have never heard of this place. I’ve never been there myself, but I’m very aware of it, and I will be there this July as a pit-stop on my way to San Francisco (I’ll probably talk more about that trip at some point). That’s what Corvallis is though; a pit-stop, and I think kind of an important one for touring punk bands, especially if you go back a couple decades. In the 90’s a lot of your Gilman bands did excursions up to Seattle or Vancouver. I think I read somewhere that Aaron and Billy Joe wrote a Pinhead Gunpowder song on the ferry from Victoria to Vancouver. I might have just made that up in my head though. Anyway, a lot of bands did these little Northwest mini-tours, and Corvallis was often a pit-stop for them, but the reason this town is really significant is because it was home to my favourite record label of all time Mutant Pop Records. It’s for that reason alone that I decided to make this a stop on my trip, in hopes of finding some trace of the Mutant Pop legacy. I have visions of finding a dusty old milk crate of Mutant Pop EP’s in the back of the local record shop. I know that’s never gonna happen. I’ll still be disappointed when it doesn’t, but hey, that’s not what I’m here to tell you.

I’m here to tell you what’s happening in Corvallis NOW and, well, the same thing is still happening by the looks of it. Lots of great local bands and lots of other west coast bands stopping there to play. A whole butt-pile of them happened to be there just a couple weeks ago for the Sinking City Pop Fest. If you missed it, and I’m almost certain you did, you’re in luck cuz they made a comp featuring all the incredible bands that played. I mean, I’m assuming the festival went ahead as planned. I have no evidence that it actually took place. Maybe someone from Corvallis can let me know about that if you’re reading this. Maybe write me a whole re-cap of the festival and I’ll post it? Maybe we hang out when I’m in town? Maybe we become best friends forever?

I don’t know why it’s a demo. I have a feeling if this band picks up a record contract they’ll just put this out as-is and call it their first album. Oh well, whatever. Lace up your Solo’s and tighten your braces folks cuz we goin’ a skankin’. Fresh from the schnitzel factories of Hamburg Germany, enter Fast Sluts. Not to be confused with the elderly rascal scooter gang, the Slow Sluts. There aren’t a hell of a lot of all-girl Oi bands are there? I can’t think of a single one. Maybe that is about to change. These girls aren’t trying to covertly enter the boys club either. It’s more like they’re kicking the door down and slapping some dudes around a bit, ya know? Is this Feminoi? Sorry, I don’t mean to contribute to the already absurd amount of sub-genres we have to deal with, but I say it’s about time for someone to stir the pot on Oi music a little. You know if Oi was going to go away it would have happened by now. At least it can diversify a bit if we’re stuck with it. That being said, this certainly isn’t pure, from the hive, Oi. There are some other things happening here. It’s close enough though. I’d start a circle to it.

Two things from Santiago that are very refreshing: Mote con huesillo and a band called Noizu. One has more peaches than the other. Hey, If you happen to be in Seattle, or rural Illinois this month, you would be remiss to not catch this band while they’re in the US. Those are the only two places they’re playing that I’m aware of. What’s going on in Chillicothe IL that would make it a likely host to one of two shows by a touring dreamgaze band from Chile? I was curious too, so I looked it up and I guess there’s a festival called Summer Camp happening there. Sounds like a good time, and if you live in that area you should consider the following very carefully: When you go to The Summer Camp Festival you will also be treated to the contemporary melodies of bands like Cypress Hill and Slightly Stoopid. You know ska punk is still very much alive, despite what you might read on my twitter. During your visit you will also experience something called Liquid Stranger! In addition to that, there’s a band called Leftover Salmon, and another one called Organ Freeman! I would definitely try to avoid both of those. Look, maybe you’re just better off driving to Seattle to see this band.
[Buy it on Amazon!]

IMPORTANT UPDATE: I just heard from Noizu, and sadly for you rural Illinois people and Seattleites, Noizu, the awesome Chilean dreamgaze band, will not be playing in your areas. It is a different Noizu, a DJ or something. My bad. I hope you didn’t buy your Summer Camp tickets already.

Houseparty – Keep It Simple [Buy it on Amazon!]

Holy ravioli this is good! You may remember this band from the Weird But Wonderful Song Titles Department. They’ve made a few contributions. Check out the song titles and you’ll see what I mean, but don’t forget to check out the music too cuz this is awfully nice. It’s Indie-punk on a surf board from Germany. Is there even surfing in Germany, you ask? Hey, they have an ocean don’t they? The Great German Ocean I believe it’s called. As I’ve said before, I would ask that you please not fact-check anything you read on this blog. I’m highly intelligent ok. You can trust that all of this is accurate. Going back to the song-title conversation; Is it not true that “I’ve Got 99 Problems And Calling A Woman Bitch Is One” might be definitely the best song title of all time, and will be for forevermore? I don’t see how it could be topped. Gosh this album is choice af guys.

Chill Parents – Hail ACAB
Oh man, you know I’m a sucker for haunted sound clips being mixed into songs. There’s plenty of that going on here. Also plenty of straight up punk rock with cut-throat vocals. I have to confess I used a thesaurus just now to get ‘cut-throat’. I was originally going to say “killer vocals” but it made my tummy hurt. It came down to either ‘cut-throat’ or ‘assassin’. To be honest, I’m not sure if either choice was the right choice.. The whole “straight up punk rock with cut-throat vocals” part of that sentence is starting to make me sick actually. This is not going well. My sincerest apologies to Chill Parents for giving you such a dumb review. This one really got away from me fast. I have one like this every month. This month it was you. I’m sorry. Great album though. Amazing actually.

Nein or Gas Mus – Self Titled
In a word, these lyrics are mystifying, but as seemingly nonsensical as they might be, I think there are some real messages to be deciphered here if you listen hard enough. The 2nd track for example (confusingly titled ‘1st’) is quite likely a protest song about guns. You can make what you want of it but I’m finding it highly contagious. Track 3 seems to me like a comment on the media and technology, and have you ever heard a lyric more profound than “this world is sucks sensitive”? Show me one and then I’ll believe you. It may seem a bit comical at first, but in my opinion, the weirdness of their lyrics only adds to what is already a totally bonkers band. You’ve got this sketchy emo math thing going on. It starts and stops on a dime. Male/female dual vocals, songs structured in a way I’m pretty sure I’ve never heard before. This is the musical equivalent of a squeaky mouthful of silly putty. I think this EP might actually be able to unhinge whatever scrap of sanity you’re holding on to. Proceed with caution.

The description on Bandcamp compares this guy to Conor Oberst which is a dangerous thing to do. Right away the listener is thinking “this better be goddamn incredible”. Well, I gotta say, it kind of is incredible. I mean if he can write about 20 more albums like this, we MIGHT be able to validate that comparison (probably not). Really though, this is the kind of songwriting that can only happen naturally and only if you’re rather gifted. Erik Withak has the gift. Or so it would seem. I’m pretty sure he does (maybe). I’ve already added one of these songs to my best-of-the-year list. I won’t say which one, but I will tell you this: It’s called Life On Lease. Man that’s an assassin of a song. 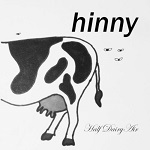 Hinny – Half Dairy Air
Michigan punk rock reminiscent of some mid 80’s indie rock. All instruments played and recorded by one guy named Josh, which I think officially makes him the most talented Josh of all time, and yes, I’m aware of Joshua Jackson from Dawson’s Creek. It’s close but this Josh is better. Definitely better than that bum Josh Homme. Probably better than Josh Ritter too. Not quite as appetizing as roghan josh, but possibly a better hockey player than Josh Gorges. Hey, if you’ve ever wondered (and I know I have) what a cabbage patch doll would look like as an interpretive dance marionette, you should check out Hinny’s music video for Gotta Give Up. I was a little concerned for Josh after watching it, but then I realized, who am I to be projecting psychosis? Have you read my blog? Clearly I should talk to someone.

ENDNOTES:
Be sure to check out the Scrap Heap section for links to all the releases that were in the conversation for Top 5. There’s loads of good stuff in there!