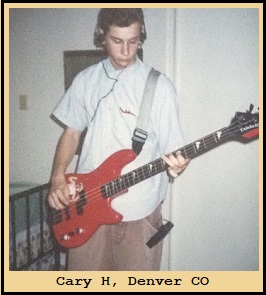 I suppose there are a couple moments where I could make the claim and point definitively where I believe that music changed my life. Was it for the better? I’d like to think so, sure.

It was around ‘91 or ‘92 in Southern California. I was a mouthy little suburbanite living on the outskirts of Long Beach. I was well into punk rock music by this time so I guess that story we’ll save for later. However, most of what I and my small group of friends had learned of punk was being taught to us by the older kids. The older brothers, sisters, and cousins were the ones imparting this loud and angry ethos of musicality upon us, the troublesome little shits of the neighborhood.

They taught us about Minor Threat, the DC scene, and what straight edge meant to some people. We learned from them the importance of Bad Religion’s logo, and how punk wasn’t stupid or naïve. It was to be taken seriously. They even taught us about TSOL and what “Code Blue” meant – not that the lyrics didn’t spell that one out for us!

Those older kids gave us a lot to go on which, honestly, without punk rock music to back it all up and facilitate these ideas and concepts that lurked behind all of the attitude and the leather and the distortion – shit, who knows where I’d be today? It was actually really great to have some guidance to help us circumvent all that music and madness. I mean, aside from irony, what was Mötley Crüe really going to teach me about drugs with the song, “Kickstart My Heart” playing on an album clumsily named, “Dr. Feelgood?” All while knowing full well that they were blasted out of their minds most of the time. It was all suddenly so dumb. It was a dumb image and an even dumber message. Punk rock music taught us that everything on the radio was bullshit. And our older pals taught us how to use punk to hone our newfound bullshit meters.

It was at one of their many house parties that I saw for the first time, Bad Religion’s video, Along the Way. It was playing on the television in the living room. A copy of a copy on VHS, so the tracking was dipping and waving in and out. It was a good bootleg for the most part.

I was already listening to Bad Religion by this time – only slightly less than religiously (har har). I’d first borrowed a blank cassette copy off a guy at school who had recorded the No Control album onto it. The music was so consistent, and driving, and good. The lyrics of the first song, “A Change of Ideas,” were written so that their cadence flowed so well alongside those perfect, chainsaw guitars. And the drums! Fast and gunning for the end of the song so much that you couldn’t wait for the next tune to start while hoping the current song would never end. It was, and remains, a great fucking album.

Back to the party.

The house had a bit of dinginess to it that you’d come to expect from a local neighborhood house in the ‘90s. The leftover style and look of the ‘80s, complete with faux wood paneling on the entertainment center AND the television; the tan carpet that might’ve been white so many years ago; the cigarette burns on the arms of a worn smooth, mud brown corduroy recliner; and the stale scent of old beer lingering with the aroma of several freshly cracked new ones.

I remember walking in, seeing the video had just started. The credits came up and their logo flickered. I heard familiar sounds of tuning and random drum hits. I saw and heard Greg Graffin. I grabbed the nearest chair from the dining room table, pulled it right up to the screen, and sat directly in front of the set. It was just like that old Maxell tape ad: the ‘Blown Away Guy’ with the shades in the chair bombarded by the incoming wall of sound. Nobody was watching but me anyway.

It was the first time I’d been able to actually witness the band perform. (This was still before my first ever show of theirs at the Palladium in Hollywood just before Generator came out. Yeah, yeah – another story.) And, since I was trying to learn drums for my own shitty little punk band that I was in, I was locked onto good ol’ Pete Finestone. That dude was an animal. I still believe that he was the one that truly defined the driving power that Bad Religion came to have. Don’t get me wrong. How Can Hell Be Any Worse is clearly one of the best, and Finestone is present for half that album. But Suffer? No Control? Against the fuckin’ Grain?!

Finestone was ripped too. He was fucking those drums up on every song! There’s even a part where he’s pulling something broken off his rack tom and then just clicking in the next song like there was nothing in the way but the audience. And those people were getting rocked! Although, the funniest part for me was when they interviewed him and he just down plays his role in the band as if he wasn’t actually the bedrock of force that the rest of the guys were standing on.

One of the high school mentors came up to watch with me. He took a sip of his beer and blew smoke from his cigarette at the screen.

“You gotta keep practicing so you can get as good as him.” He pointed.

“You still have a long way to go though, dude.”

“Yeah. I can’t practice at my house. Parents hate my shit.”

“Well, I mean, he’s buff, dude. You gotta long way to go. You’re just a little skinny guy.” He chuckled as he took another drink.

A few months later I took the bus over to Zed Records in Long Beach and bought my own copy of Along the Way. I watched it until it wore out. I memorized it. Honestly, I still have it memorized.

Since I couldn’t practice at my own house, I sat on a stool in front of a mirror in my room, put the video on, and pretended to play what Finestone was playing. It was really the only way I could practice – mimicking the physical as best I could in order to get that muscle memory working.

I think the slip cover on that VHS was in tatters by the end of it all. But I swear to this day that whenever I’m writing or playing the drums, one of the things I think of is Pete Finestone behind his set at those Bad Religion shows. I think of what sort of rolls or fills he would do and try to incorporate that sound and that feel into my own parts.

They should bring Finestone back for a reunion, man. That dude’s drumming changed my life.

Thank you Cary, for the trip down memory lane! You can hit Cary up on twitter @CaptFakeHead

If you’re reading this and thinking “hey I have a story about how music changed my life!”  please, write it down and send it my way. I don’t care if it was 1978 or 2018. All stories are welcome as long as they’re about punk or punk-adjacent music. Catch me on Twitter @SteveDoesnt or email me at doesntsuck604@gmail.com

Let’s say you’ve broken your leg and you’re stuck on the couch and you’re bored with the rest of the internet and you’ve already read this entire blog.. Well I’ve got something that will help you kill some more time. Here’s a big pile of compilation albums you can go through. Literally hundreds of bands to discover. I tried to specify the genres for you as well. Dig in, and keep that leg elevated.

Holy hell this has been a month. I discovered so many great albums in February, I was wondering if I would have to make this a top twenty. It was no easy task whittling it down to this powerhouse ten right here. Yeah I said powerhouse, as in: an installation where electrical power is generated for distribution. I’m not saying this top ten is going to charge your phone or anything, but what I am saying is that it probably is putting off radiation. If you’re using a lap top, do not place it directly on your lap.

Don’t forget to check out the SCRAP HEAP to see a shyte-load more great releases from February! I like to say “shyte” now. I’ve been watching this Irish show on Netflix called Hardy Bucks. Every time I watch it I’m reminded of how pittifully boring our way of speaking is here on the west coast on North America. There’s absolutely nothing interesting about it. Utter shyte I tell you.

What else is going on this month? Well since you asked, I did start a Facebook Group. There’s already been a lot of fun conversations happening and there’s bound to be many more. We’ve got a lot of awesome members who don’t suck at listening to music. I will pretty much add anyone who sends a request at this point so g’head and join up. If you’re not on Facebook, good for you. Seriously, Facebook is shyte. I wish The DS could be it’s own self-contained online community. Don’t you? Well.. here’s hoping.

I also started a new feature called TRAJECTORIES: Reflecting On The Moments When Music Changed Our Lives. I took the liberty of writing the first entry, but we have other entries from other weirdos lined up. I love hearing stories about how people got into punk, or underground music, so that’s pretty much what it’s about. I want to hear from anyone and everyone who has an interesting story on that subject. Please write to me at doesntsuck604@gmail.com . Yeah bye.