Standard Rat Fuck – Self Titled [Buy it on Amazon!]

We can’t go any further until we talk about the name, Standard Rat Fuck (or SRF for short). It’s not some elaborately intricate rat fuck we’re talking about here ok, it’s just your everyday standard rat fuck. Alright, moving on. Ratfuck is officially a genre now, because there’s really no other genre we can put this in. Years from now when everyone and their cat is in a Ratfuck band, people will look back on the early days of Ratfuck music, and they`ll talk about this album and they’ll say “That was it. That was the EP that set the standard for what Ratfuck would be”. Really, I can see that happening. If it wasn’t 2017, that is exactly how this would play out. It’s that groundbreaking. Right now track 5, Freedom Fries, is in my top 3 songs of the year, and it’s not just because of the line “Big fat gold cock sanctified in the Vegas skyline”. Though I can’t say that wasn’t a factor.

Amigos Subterraneos – Self Titled
Adjust your ears to lo-fi and prepare to be bum-rushed with fantastikness. I always find that it takes a minute or two for your ears to get there, but once they do, this smooths right out and there are so many goodies to be discovered. The lyrics are all in Spanish, so I went and translated some of them. They’re vague for sure, or maybe it just doesn’t translate well, but powerful none the less. It’s not about the lyrics here anyways. Don’t get me wrong, bad lyrics can ruin any band, but with this I’m drawn more to the melodic qualities of the vocals since I don’t understand the words and that’s working out just fine for me. I could listen to this all day.

Shepards – Self Titled
You ever have one of those days where, you know, you’re listening to a lot of ratfuck and you just need a break from it for a while? Something to chill you out a bit? This here EP is gonna be perfect for that. It’s like some laid back indie/post-punk stuff that isn’t too aggressive. It just sort of hangs out and keeps you company. Minds it’s own business, but occasionally goes on mind blowing guitar tangents. You know what I’m sayin’? It’s nice. You like it. It’s good. It’s really good.

A lot of EP’s this month. This one grows on you as if you were a sloth and the music was jungle fungus. Just all matted up in your fur etc. At the beginning you’re like “meh, idk” but each track seems to get consecutively more awesome, and then when you go back to the beginning you’re like “wow wtf? All of these songs are awesome”. I mean the cover art lacks creativity, sure. Someone just took a picture of their feet, but what I’ve learned is, some bands are just too busy making killer tunes to give a shit about album art. If you give so many shits about your music there sometimes are no more shits left to give about anything else. These guys are plum out of shits. Also top-notch bandcamp description. 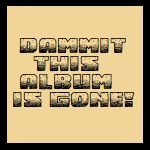 Going Under – Never Not Down
It might sound kind of predictable at first, but there’s a lot more to this than just your standard ratfuck. I mean pop punk. Don’t be put off by the threatening language at the beginning either. I think they just got carried away. They have a song on here called $hark Attack which, incase you were wondering, is far better than the Bouncing Souls song by the same name, and not just because theirs is spelled with a dollar sign instead of an ‘S’. Though I can’t say that wa$n’t a factor.